Few days ago, in Casa da Cultura of Camara de Lobos  was  screened Iara Lees documentary film production  with support of Teatro Metaphora.
It was in french, but with Portuguese subtitles, so I could not understand many things, but I felt very positive emotion,which was coming from movie. I mean the  way film was made, it seems author wanted to show us positive side of being in Africa, with less conditions and also how amazing are people from there. 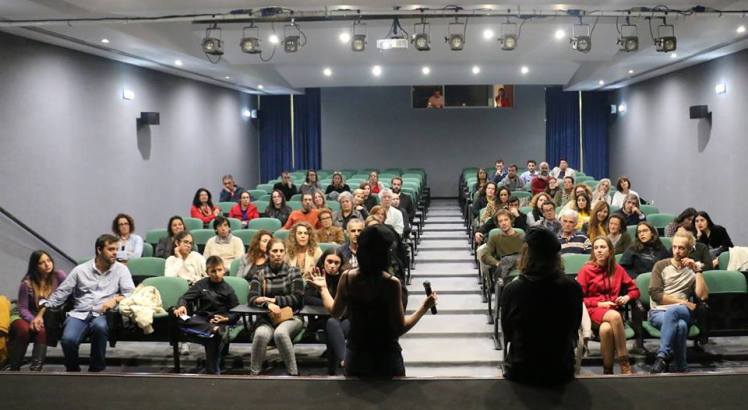 Iara Lee  was talking with her whole soul and heart about them and  about the process of making movie.  She is from Brazil, but as she said, her heart is Africa.

For me was also surprise, when she told me she knew about Georgia and how beautiful is my country and how tasty is Georgian food.

I felt pride, when I listened  her words

Here is small introduction and also link of trailer:

Burkinabè Bounty, a documentary from Cultures of Resistance Films, chronicles agricultural resistance and the fight for food sovereignty in Burkina Faso—a small, landlocked country in West Africa. Showcasing activist farmers, students, artists, and leaders in the local Slow Food movement, the film looks at how the Burkinabè people are reclaiming their land and defending their traditions against the encroachment of corporate agriculture. From women gaining economic independence by selling “dolo” beer, to youth marching in the streets against companies like Monsanto, to hip-hop musicians reviving the revolutionary spirit of Thomas Sankara, Burkinabè Bounty shows the creative tactics people are using to take back control of their food, seeds, and future.

Thanks to Iara and her colleagues  for this amazing work and

Thanks  to Metaphora, because of giving audience always nice  things to discuss and  to explore.