My first week in Madeira. There are so many things to tell.
In the very beginning of the week we were brainstorming and discussing a lot at Teatro Metaphora. We were trying to create some new ideas that we can put into life. And we did.

But, Lidia told me not to tell a lot about work. She said: tell about my feeling that I got on Madeira, about walking and living. So, there were soooo many impressions. I can’t choose which thing impressed me the most, so let’s put it in the timeline.
My first Portuguese language, I already started to learn it. Hope, that I was not so annoying to our teacher Raquel with my questions. But, I feel I’m not so exited of this language and this is way my level is so low. Yet.
Once, in the middle of the night, I decided to walk on the top of Pico da Torre. This is the hill in Camara de Lobos with a very good view. I was walking alone and I was making some pictures when somebody drove to me with at a very high speed with a pick-up. He stopped and looked at me with headlights. But I was pretty calm and keept making pictures of Camara de Lobos in the night lights. So, I guess he understood that I’m not a banana-thief and then he left.

The one of the really biggest impressions of that week was swimming in the ocean! It was my first time in my whole life. Ocean it such a big something. And you. You are a small drop in it. You realize that is other world, which is different. And you are a guest there.
Watching movie together on Friday night could be very good tradition and kind of activity. Italian volunteers prepared the movie for us. I don’t remember the name of it, but it was good time for relaxing, also reading sub-titles in Portuguese, even though meaning of it was unclear to me.
Preparing food (together), cleaning our big house (together), living with new people – it is such a new things to me, I am (we are) trying to learn how to make it better. These things are a big part of all projects for every volunteer. Every new thing that you do first time makes you stronger.
Our weekend was so busy. It was so busy because of new impressions and thanks to Lidia. She proposed us kind of activities that I wanted to do but I didn’t, till this weekend. On Saturday we were walking on Cabo Girao. Cabo Girao is a cape at 580 m altitude. We decided to walk there on footand it was such a right solution. I’ve met such a big amount of new plants; I even didn’t guess that some of them exist. It was rainy, but for me it’s ok. Rain always makes every hiking more interesting. We were walking in the clouds!!! It looks like you’re already died. Everything around you so beautiful, air is so fresh and clear, very loud silence keeps staying in your head, there is the ocean below you, and you thinking about nothing. Time stopped. And then you go down. Quickly. You are coming home tired, hungry, but full of impressions. And then you sleep. With a smile on your face.

On Sunday I only woke up, but Lidia already was knocking on our door. She invited us to go to Funchal along the promenade on foot. And it was such a good idea. But. On the very beginning of our walking right on the parking place in Camara de Lobos we saw you know what? You will never guess! There were some Portugal soldiers inflating a big green balloon. We decided to see what would happen next. And you know what? One of them said to form a line of volunteers to fly. We are already volunteers. So, of course we flew!! Not so high, but anyway we did it! Then, we were walking to Funchal, we visited some mall, but anyway I think everybody understand that a visit to the mall is not so exciting as the big green balloon with Portuguese soldiers!

And…In the end. One more foot print in my memory was left by a very old woman who was fishing on the beach. She caught a few small fishes. But she was trying so hard. 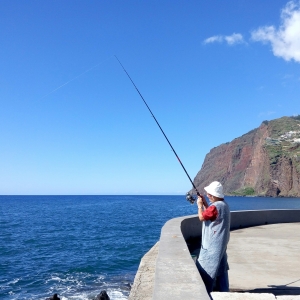